In the year 1861 and for some time afterwards, the gore lot where the First National Bank and Kahn's store now stand, was occupied as the home of one George Potter. The house was a large two-story, edifice, with a flat roof, was painted white and surrounded by wide porches, the windows being protected by green shutters. The house was built in the Southern style, as many of the early settlers here came from the South and built similar homes. G. C. Potter property in the 1876 Map of Oakland, Alameda and Vicinity

There was a nursery connected with the place, this nursery being upon the Northern portion, about where 15th and 16th streets now are. Stephen Nolan was manager of this nursery for Mr. Potter and lived in a cottage rented from a Mr. Van Hawkin at the northeast corner of 14th and Franklin streets, where the Presbyterian Church afterwards stood, now "Arcadia." Before that church was built the congregation worshipped in a church building on the east side of Broadway about where 13th street now intersects it, and was well surrounded by oak trees. The building was a small, square one, with a basement fitted up for Sunday school class. This building was afterwards moved around upon 13th street, raised, and now constitutes the St. Charles Rooming House at No. 429 13th street, over the two restaurants occupying No. 423 and 425 13th street. Mr. Potter's property was surrounded by a white picket fence, hedged on the inside with beautiful pink castilian roses, which were a beautiful sight when the bushes were in full bloom. The first Camelia which ever bloomed in Oakland and also the first Century plant, bloomed in that garden. The latter plant was such a curiosity that the Ladies Relief Society raised quite a sum of money for their work by charging an admission fee to see this new flowering Yucca, A spiral staircase was built around the tall stem so that those who wished might climb up to have a better view of the flowers. The nursery was abandoned when Mr. Nolan established his own nursery upon a 5-acre tract at 34th and Grove streets. 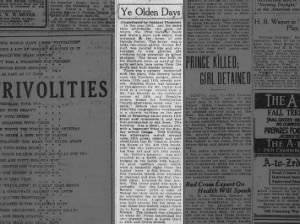