(Contributed by Oakland Pioneers - No. 38)

Although Horace W. Carpentier was elected as the first mayor under the city charter, the council elected at the same time was decidedly antagonistic to him and his claims upon the waterfront, and also to the claims of E. R. Carpentier for his exclusive ferry privileges. On August 6, 1854, Alderman A. D. Eames introduced an ordinance providing for the construction of a wharf on the southern boundary of the city. The ordinance was passed and sent to the mayor for his signature. On the 19th the ordinance was returned by the mayor without approval and accompanied by a long statement to the effect that the ordinance was illegal, unjust and liable to plunge the city into costly litigation. On September 13th, upon motion of Alderman Marier, the ordinance was passed over the mayor's veto by the votes of Messrs. Eames, Gallagher, Marier, Kelsey, Mr. Joselyn voting no. For some unaccountable reason, this ordinance was repealed December 9, 1854, leaving Carpentier master of the situation.

On June 14, 1855, the City Council adopted the following ordinance:

"The council of the City of Oakland do ordain as follows:

"See, 2 - Any contract made or purporting to have been made under or by virtue of said ordinance is hereby declared null and void."

The passage of the ferry ordinance was the cause of the establishment of a ferry by James B. Larue of Brooklyn (East Oakland) and led to the famous suit of Minturn vs. Larue, in which very interesting affidavits made by Dr. Edward Gibbons and A. Marier, were filed. Following is a synopsis of the Gibbons affidavit. The other will follow later on:

Gibbons states that he had resided in Oakland since 1851 and was a resident when the act incorporating the Town of Oakland was passed, that no petition or request of the people of that place (previously known as Contra Costa and never by the name of Oakland) had been made to the legislature for the incorporation; that the subject of incorporation had not been discussed by the citizens nor any public meeting called in regard to it, and that any intention to incorporate was not known to them; that the population did not exceed 70 or 80 persons; that when the news of the incorporation of the Town of Oakland was received, it was a great surprise to them; that it was afterwards ascertained that the town was incorporated at the Instigation and through the agency of H. W. Carpentier; that a few days after the passage of the Act of Incorporation, viz., on May 10, 1852, an election for trustees and other town officers was held and Amedee Marier, A. W. Burrell, A. Moon, E. Adams and H. W. Carpentier were chosen as trustees; that before the election Carpentier showed deponent a ticket containing the names of persons to be voted for, and as Carpentier, Moon and Adams were partners in selling town lots, he advised Carpentier to strike off the names of Moon and Adams, but that Carpentier refused; that Carpentier did not qualify as a trustee, and that no election was held to fill the vacancy; that about May 18th deponent heard of the passage, by the trustees, of an ordinance giving the waterfront of the town to Carpentier, that he immediately inquired of Carpentier the nature of the ordinance, and Carpentier replied that there was talk of a called-session of the legislature and danger that the Act of Incorporation might be repealed, and that he did not want the town deprived of so munificent an endowment; that he had rather deponent or some other responsible person would hold it than himself; that It was a mere conveyance in trust for safekeeping of the waterfront property; that he would give bonds if necessary to restore it to the town, and he added, "That there was no interest for the people to know anything about the transaction"; that Carpentier requested deponent to inform Mr. Marier, president to the trustees, that he would give bonds to restore the property and to report their conversation to Marier, which request was complied with: that deponent was present at a meeting of the trustees on May 18th; that Carpentier made a statement before the trustees, stating that, as some dissatisfaction had been expressed in relation to the ordinance passed, he would alter it to a term of years; that the words "37 years" were inserted by Carpentier after a consideration of the ordinance, and deponent believed from Carpentler's declaration, that the limit of 37 years applied to the estate or interest in the waterfront, but that after a lapse of six months or more, deponent found out that the words inserted applied only to the collection of wharfage and dockage. 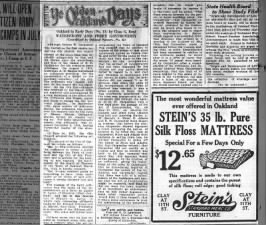