(Contributed by Oakland Pioneers - No. 66)

We will make the start at Zimmerman's Garden, which was on the north side of Second street. between Harrison and Alice. This was in the early '60s. It had a lot of willow trees, dancing platform, bowling alleys, shooting galleries, swings, wooden tables and benches, and was a very popular place. The different lodges and societies would have their annual picnics there, to which everybody went, and sure had some good times

The building was a two-story frame, with saloon and dining room. This place was known and popular for its dinners at 50 cents: and one of the star customers was the very wealthy Michael Reese, of San Francisco; and, as the saying was at the time, "It must be pretty good for Michael Reese to come over here and walk so far (from the foot of Broadway) for a dinner." Then it was a place where we boys could go on Sunday afternoon and pass away the time and were always sure to meet with the rest of our chums.

Now for Miller's Garden, which was on the west side of Broadway, between Thirteenth and Fourteenth streets. This occupied the entire block and had a high board fence eight to ten feet high around it.  Inside there were some fifteen or twenty large oak trees, and they sure were large ones, too.  Then there was the dancing platforms. tables and benches and other conveniences suitable for out-of-door entertainment.  This was also a very popular place for picnics, and on Sundays there were acrobatic performances by the Siegrist family, such as tight-rope walking by Rosa, while August would ride a bicycle on the tight-rope with his sister Emma doing a stunt on the trapeze hanging under his wheel. ["Wheel" was a term for bicycle, in those days. - MF] At that time, August was the only one around the bay who did the stunt of riding a wheel on the tight-rope.  Then Father Siegrist had some trained dogs and they sure would do some fine acts.

On the southwest corner of the block was the saloon in a story and a half building, with its usual water trough in front and the rest of the trimmings that go with a garden. The admission on Sunday was 25 cents. Well, we boys had to get in, of course, and 25 cents was a lot of money at that time. but just leave it to the boys. Did we get in? Sure, and it was worked in this way. Two of the boys would walk through the saloon, out of the back door and into the garden, then to the Washington street fence, climb up on the inside and pull up our chums from the outside, and over they would come. Once in the garden, we were safe and never got caught at the game.

Well, the property changed hands by and by and Miller had to vacate, and the garden was abandoned.

In my next, we will go to two more of the pioneer places of amusement, known as parks rather than as "gardens." 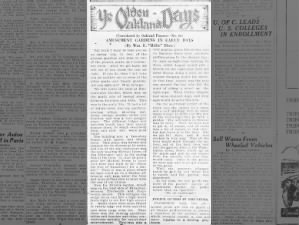