THE CREEK FERRIES OF EARLY DAYS (No. 3)

(Contributed by Oakland Pioneers - No. 60)

On San Pablo road beyond Golden Gate an Irishman hy the name of Mathews had a large ranch, raising grain and stock. Mathews was a man who could not be bluffed: honest and square in his dealings with his wealth he would spend dollars rather than to be cheated out of a single cent. One day Mathews drove three cows with three suckling calves down to the creek hoat to be shipped across the bay. The shipping clerk demanded $1.50 a head all around, cows and calves

Mathews claimed the calves were under age and not cattle. The new rules of the company rated all stock as cattle. His Irish was up. Shaking his fist at the captain, he declared. "I'll fix you, I'll have a steamboat of my own."

And so he did. One morning a noise like a hundred bagpipes was heard on the creek, the people rushed to see, and there, with flags flying, calliope playing "My Old Kentucky Home," with Pete Mathews standing on the upper deck, was the grand and large sternwheel steamer Chin Du Wan.

At the wharf was the old company's boat, which claimed a lease, but Pete asked for no permission, pushed right in between boat and wharf, tied his lines, jumped ashore and invited the whole town to take a ride on what he termed in his Irish brogue the "Chin Duggan."

Pete's Irish was up and the fun commenced. Fares were reduced to ten cents, and if you did not have the price, you rode free.

Bands were employed by the old company, but could not compete against that calliope. Runners were employed, toughs imported from the San Francisco side, free rides and free refreshments the inducements, but under the management of Ed Campbell, clerk of the boat, afterwards for many years was deputy county recorder, Pete held on, met them at every turn and brought them to terms and forced them out of business.

Everything ran smoothly for Pete until one day the sound of another calliope was heard, and up the creek came the beautiful side-wheel steamer S. M. Whipple to compete against the Chin Du Wan under the management of Captain Ben Wright. Mathews knew that he could not compete against the new boat, and his lease on the Chin Du Wan being about to expire, he threw up the sponge. He had had his revenge and went back to his old farm, and until his death was one of the most respected residents of the city.

This virtually broke the monopoly of the creek route in early days. Long wharf was opened and most of the freight and travel went that way, and boats for freight only ploughed the waters of the estuary.

A small boat named the Elk was placed on the run by Ike Wingate, who ran an express company between Oakland and San Francisco. Then another boat, the Vaquero, built by Dr. Merritt and Captain Michelson, made daily trips to San Francisco. 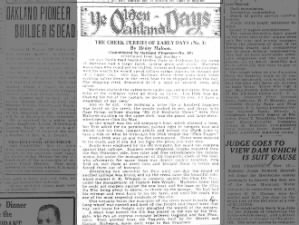