Trestle Glen is an affluent neighborhood in Oakland, California. It is located east of Lakeshore Avenue, a shopping street which it shares with the Grand Lake neighborhood.

The streets are laid out in the curvilinear pattern of early 20th century garden suburbs. Many of the houses are nestled in the surrounding hills, and were built shortly before the Great Depression. Homes were built in a variety of styles, including Craftsman, Prairie, Tudor Revival, Spanish, and Neo-Mediterranean from the 1920's, 1930's and 1940's by such renowned architects as Julia Morgan and Bernard Maybeck. Trestle Glen is named after a short-lived amusement park, built by the Realty Company, that opened on 23 April 18932 on the south side of Indian Gulch at the end of the new East Oakland Street Car Company streetcar line that ran up Brooklyn's 4th Avenue. A large rail trestle ran across the valley of Indian Gulch at treetop level. The park's large pavilion was destroyed by a fire in March 1898 and the 4th Avenue line was discontinued two weeks later.3 The trestle was dismantled in 1906 when the line was rerouted; the new rail line ran along Trestle Glen Creek. The name stuck to the valley and later the planned neighborhood.

After the Peraltas, much of this land belonged to Peder Sather and later his heirs, including Jane Sather of UC Berkeley's Sather Gate. Starting in 1896, efforts were made to keep the area as parkland as part of a greenbelt connecting Dimond Canyon, Mountain View Cemetery and Lakeside Park.4 The last of these failed in 1917.

The new streetcar line was instrumental in spurring the development of residential neighborhoods in the area. Trestle Glen was largely developed by Frank C. Havens and Walter Leimert in the 1920s. 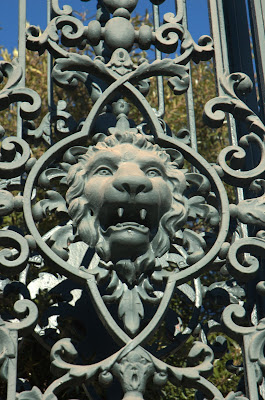 detail on gate
photo from Our Oakland 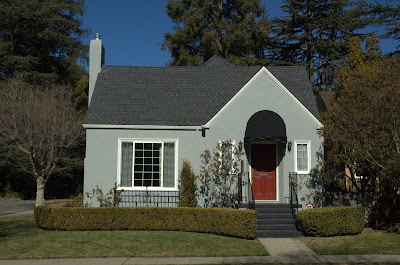