1st Ave - E. 14th St / E. 12th St sign
photo CC SA-BY-2.0 from Erica FischerMany Oaklanders were very fond of the old signs that used to stand on the now-demolished roadway at the foot of Lake Merritt. For native Oaklanders, they provided a sense of comfort, since they had nearly always been there, and would apparently remain forever. For those that moved to Oakland later in life, it was just a treat to see these anachronistic signs still in use, since their compatriots had long since been removed elsewhere in California, and replaced with the ubiquitous green highway signs. But in August of 2011, as part of the Measure DD reconstruction of the roadway, the signs were removed -- and to the surprise of some, the removal was permanent, in part because the signs were not legal under modern highway signage standards. The removal of the more well-known Southerly / Northerly sign is shown in this a series of pix from Erik Niemann's excellent blog about the 12th Street project, and this separate video of the sign being removed from its posts.

The good news is that the signs still exist, and were not destroyed for scrap. The bad news is that the Oakland Museum of California was unable to take the signs, even though the Museum holds three Dorothea Lange pix of the Southerly/Northerly sign and the courthouse from 1957 (as seen at the bottom of this page). Further, despite pleas from the Oakland Heritage Alliance and other activists, including this appeal on Facebook, the historic community was unable to locate any local residents or businesses that could store or take ownership of the signs. As a result, they were destined for the scrap heap, until Miltiades Mandros, an Oakland architect and midcentury afficionado, was able to locate a sign collector in San Jose that had both the interest and the storage space for the signs. The collector, a gentleman named Ronald Cabanayan, worked with McGuire and Hester, the contractor for the project and technically the then-owner of the signs, and arranged for the signs to be removed, placed on a flatbed, and taken to Mr. Cabanayan's storage area in San Jose.

When contacted in 2013, Mr. Cabanayan said the following about the signs, and later followed up with a pic of the Southerly/Northerly sign in his collection: Southerly/Northerly sign on 12/4/13
(photo courtesy Ronald Cabanayan)I'm happy to see that there's still some interest in the signs. They don't look so big when they are in the air but are difficult to manage on the ground. I had to take them apart from their frames but they cleaned up pretty well. With just the sign panels, they are much more manageable to move around but still pretty darn big and heavy. I'll need to get a camera to send you a good picture of where I have the Southerly/Northerly sign in my small collection. The other sign is stored for now.

I originally offered the signs to the San Jose Historical Museum but they declined since I couldn't make the connection with San Jose. But, I'm attached to them now. 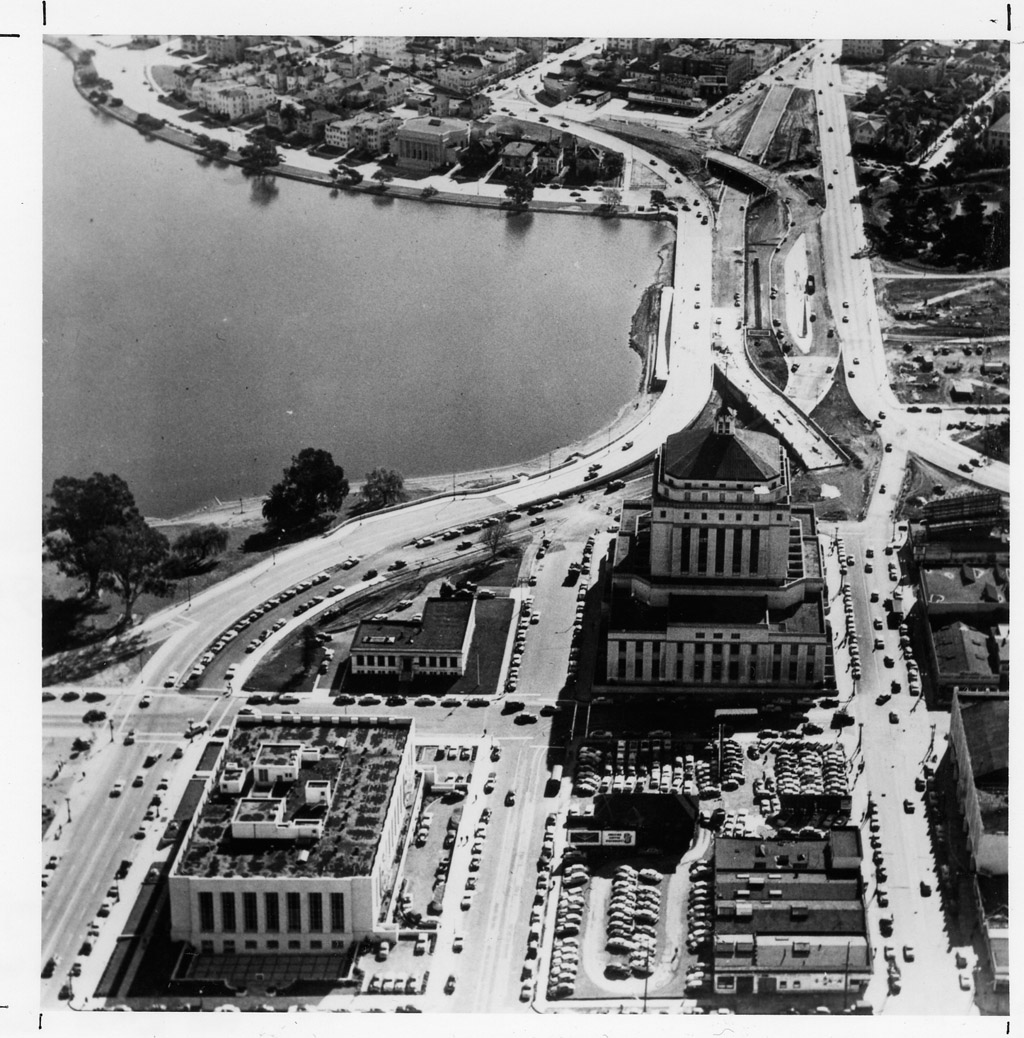 The signs were originally erected in 1950, as part of the construction of the Frickstad Viaduct atop the 12th Street Dam, in an attempt to reduce traffic congestion in the area. This construction created what some called "world's shortest freeway," and also resulted in the destruction of the gardens near the Henry J. Kaiser Convention Center (then called the Oakland Auditorium) in the process. Unfortunately, the new road was only truly useful for less than 10 years, since the construction of the Nimitz Freeway and then the MacArthur Freeway dramatically lessened traffic on 12th Street.