The Sacramento Northern Railway (SNR) was an electric interurban railroad that ran between Oakland and Chico. It handled both passengers and freight, and ran over Lake Temescal and through Montclair Village. Between 1939–41, its passenger trains went all the way to San Francisco via the Bay Bridge, ending at the Transbay Terminal.

The SNRʼs yard and machine shop (where Gene’s grandfather worked) lay at the end of its right-of-way, at 40th and Shafter (2016 site of “Homeroom”). There, trains connected to Key System tracks along 40th, leading to the Key System Mole, and later across the Bay Bridge. North of its yard, the railroad ran up Shafter Avenue, crossed College Avenue, and climbed up to Lake Temescal, where it ran along the eastern shore, and crossed a former extension of the lake. It ran through Montclair Village and up Shepherd Canyon. The Havens Station (named for developer Frank C. Havens) was near Paso Robles, and then the train entered a 3200′ tunnel [or 3600′ or 3700′] near Park Boulevard (later renamed Shepherd Canyon Road) and Saroni. It exited the tunnel in Contra Costa county, near Pinehurst Road and Huckleberry Botanic Regional Reserve where the Eastport Station was. From there, it ran near the town of Canyon, thence to Moraga (there was a station near Saint Mary’s College) and Lafayette.

Conspiracy theorists will note that GM, Firestone, Standard Oil and other companies really did conspire to “do in” electric streetcars and interurban railways around the U.S. But the Sacramento Northern also faced increasing competition from shorter, less steep railroad routes, 3 as well as changes in businesses that were formerly customers of its freight service.

The railroad included passenger service until 1940, while freight service ended in the 1960s. The SNR ceased running from Oakland to Lafayette in 1957, when its rails and overhead wires were removed and the tunnel sealed. The last remnants of the Sacramento Northern were officially folded into the Union Pacific in 1983. shops at 40th and Shafter 1 trestle over Lake Temescal being constructed Reverse side of OA&E 1910 postcard A number of remnants survive in todayʼs Oakland. 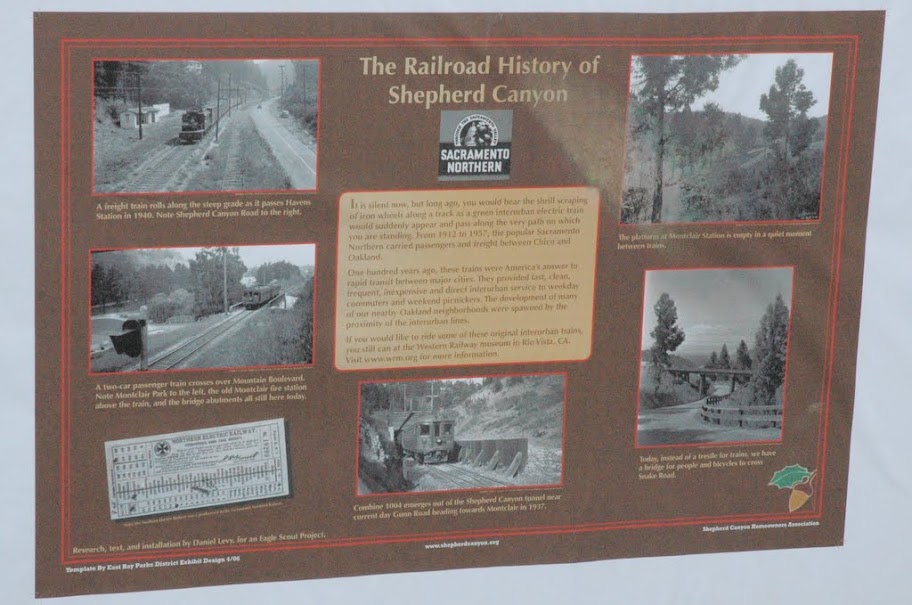 interpretive sign on the railroad trail
CC SA-BY Our Oakland