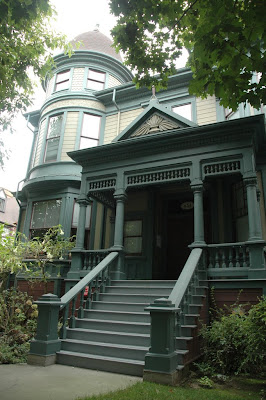 Remillard House is an 1887 Queen Anne Victorian located in Preservation Park. The home of Pierre (Peter) Remillard, a brickyard owner whose bricks were used to construct the First Unitarian Church of Oakland. His daughter Lillian Remillard may have tutored Jack London in the Remillard House.

Unlike most of the homes in Preservation Park, the Remillard House is in its original location at 654 - 13th Street.

The city of Oakland files suggest that when originally built, the house may have lacked the angled and rounded bays of the tower on the west wide. This is because of changes in the 1889 Sanborn map, and the original concrete garden walkway ends abruptly.

The file also notes that while it may seem odd that the owners of a major brick company didn't build their home out of bricks, it's because it wasn't considered fashionable in the late 19th century to build homes out of brick.