Piedmont Avenue is a neighborhood in North Oakland adjacent to Temescal, Rockridge, Mosswood, and the City of Piedmont. Its major features are the Piedmont Avenue shopping and dining district, Piedmont Theatre, Mountain View Cemetery, and Kaiser Permanente Hospital. Piedmont Avenue is one of the most vibrant shopping districts in the East Bay due to its unique collection of independent businesses and role as a gathering place and errand-running hub for residents. In addition to its well-known dining and shopping, Piedmont Avenue also offers spas, dessert shops, nail & hair salons, business centers, groceries, book stores, pet supply and services, laundry services, fitness clubs, pharmacies, wine stores, a library, bank outlets, and a US Post Office branch. With both an elementary school and a large retirement residence, the neighborhood has a wide spread of age groups.

Situated in Oakland's foothills, it sits in a depression between a ridge to the southeast and a low rise to the northwest. Glen Echo Creek drains Moraga Canyon through Mountain View Cemetery, and runs through the neighborhood mostly underground, although it runs in the open for several hundred feet through Glen Echo Park between Panama Court and Montell St. Further downstream it resurfaces again across MacArthur in Oak Glen Park for another several hundred feet before being buried and finally emptying into Lake Merritt near the Cathedral of Christ the Light at Grand Avenue. A thorough history of the main branch of Glen Echo Creek was compiled by PANIL, a neighborhood group. A second branch, called the Rockridge branch, originates above Claremont Country Club, flows through Bilger Quarry by the Pleasant Valley Safeway complex, and continues underneath Mosswood Park before joining the main branch below Glen Echo Park. There is a very short open stretch of creek in the block bounded by 38th St, Macarthur, Broadway, and Manila Ave.

Mountain View Cemetery, while heavily modified, is the largest remaining semi-natural space in the area. Black-tailed deer and wild turkeys can be seen in the cemetery. Local neighborhoods see the occasional raccoon, skunk, opossum, and rat, as well as hawks, crows, and a variety of songbirds.

The famous Key System streetcar company established its first transit depot at what is now known as Key Route Plaza at the corner of Piedmont Ave and 41st Street. Today, half of the depot building remains as a cafe, and the other half has been replaced by a parking lot, a telling fate for a train system displaced by the rise of the automobile.

There are two separate buildings on Piedmont Avenue designed by Julia Morgan: The Fred C. Turner Shopping Center between 40th and 41st, and the Chapel of the Chimes at the gateway to Mountain View Cemetery at the northern end of the street. The cemetery itself was designed by Frederick Law Olmsted, acclaimed designer of New York's Central Park and much of UC Berkeley campus.

The Ohlone Mural, created in 2006 by Rocky Rische-Baird. At 41st & Piedmont, the mural is outside of Gaylord's Coffee.

"The Rare Bird", Thomas Haag, 2011.
Located in the alley between the Rare Bird store and Cato's Alehouse.
Photo Credit: http://thomaschristopherhaag.com/

Morcom Rose Garden: The Amphitheatre of Roses is nestled in the hills between Piedmont and Grand Avenues. 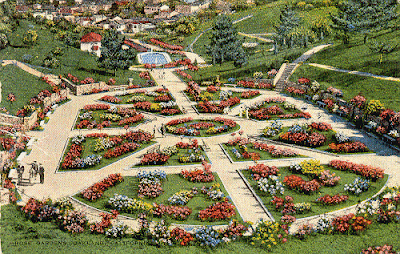 Broadway Development: The long-awaited revitalization of the section of Broadway Avenue paralleling Piedmont Ave. has shown increased momentum since 2011. In recent memory it has been a culinary wasteland of shops offering up junk food to nearby Oakland Tech High School, as well as automotive retail and service shops - with a single exception: Mama's Royal Cafe, a delightful breakfast institution. Ohgane Korean grill made a significant capital investment in renovating its space to offer family-friendly dining. More recently, Blue Bottle Coffee opened a retail location in the old white-tiled W.C. Morse building in February 2014. The old Anderson Carpet & Linoleum building at the corner of 41st St. has breathed significant new life into this stretch of Broadway, opening a CrossFit gym in Spring 2013; Cafe Underwood, with an added patio for outdoor seating, in Summer 2014; and a second location of Oakland startup Trueburger in early 2015.

40th St. Development: This activity has coincided with the steady pickup in small business activity on 40th St. between Broadway and Macarthur BART, which is being redeveloped as a high-density transit village with retail shopping. Manifesto Bicycles (2008), 1-2-3-4 Go! Records (2008), and Subrosa Coffee (2009) led the way, and have beaten the odds by surviving in an unlikely location during a down economy.

In 2011, Homeroom, the always-packed mac & cheese eatery (not to be confused with Piedmont Ave.'s Homestead) kicked off the more recent wave of new businesses when it was started on the ground floor of a newly-constructed modern apartment building. In 2012, Manifesto Bicycles and Subrosa Coffee partnered to install the second parklet in Oakland, and Beauty's Bagels opened on nearby Telegraph Ave. Hog's Apothecary followed on 40th near Broadway in 2013, serving upscale beer and sausages. Elder and Pine, a vintage clothing store, opened in 2013, and 1-2-3-4 Go! expanded for a third time in January 2014. Homeroom's production and 'to-go' business expanded into a second location one block away in late 2014. A new 'whole animal' restaurant and butchery called Clove & Hoof opened in late 2014, at the corner of these two hot streets: 40th & Broadway. In early 2015, Elder & Pine announced plans to move to Rockridge. In its place, Green Day's Billie Joe Armstrong and partner Bill Schneider will open a guitar store called Broken Guitars (slated for opening April 1).

This trend is anticipated to continue with the construction of the Macarthur Transit Village; the redevelopment of the Pleasant Valley Safeway complex; the recent construction of new Kaiser Hospital buildings in the vicinity of Broadway/Piedmont & Macarthur Ave.; and Oakland's initiative to redevelop the Broadway/Valdez district, spearheaded by the 2014/15 construction of a Sprouts grocery store at the merge of Piedmont & Broadway.

Nearby: Mural of the entrance to Rockridge at the time of the neighborhood's creation. Located on Broadway at 51st St./Pleasant Valley Rd. By Stefen, 2009.

Nearby: Mural of the pergola at Lake Merritt. Located on Pleasant Valley Rd. at Broadway. By Stefen, 2005.