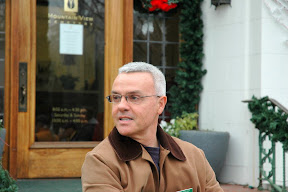 Michael ColbrunoMichael Colbruno is a lobbyist, Democratic Party activist, city commissioner, history blogger and independent classical music producer. He is currently a partner with the government affairs firm Milo Group of California, which focuses on the New Economy. He is one of the recipients of the 2017 San Francisco Business Times OUTstanding Business Leaders Award.

He was appointed to Oakland's Port Commission by Mayor Jean Quan and confirmed unanimously by the City Council on May 7, 2013. His official 4-year term began on July 11, 2013 and he was reappointed to a second term in 2017 and third term in 2021 by Mayor Libby Schaaf. He served for one term as President of the Commission and served for three years on the Executive Committee. As President, he has made the implementation of a renewable energy policy his top priority and serves on the Aviation Ad Hoc Committee and Audit Committee. He co-founded the country's first LGBT Port affinity group with San Francisco Port Commissioner Leslie Katz and San Diego Port Commissioner Bob Nelson.

Colbruno filed to run for District 2 in 2014's City Council election. He said on facebook on February 18, 2014, that he will withdraw if Abel Guillen enters the race. After Guillen announced he was running, Colbruno announced he was withdrawing. Mayor Quan named Colbruno to be co-chair of her 2014 re-election campaign. (Statement from Colbruno here.) He was also co-chair of California Board of Equalization member Betty Yee's campaign for California State Controller.

Colbruno is a longtime Democratic Party activist and has been a delegate to both the state and national conventions. He was appointed to serve on the California State Democratic Party Legislative Committee in July 2021. He was chief-of-staff to Carole Migden during her term on the San Francisco Board of Supervisors and at the California State Assembly. During that time period, Michael took a year off to serve as Press Secretary for the successful San Francisco 49ers stadium campaign. He then served for over two years as Mayor Willie L. Brown's Deputy Director of Legislative Affairs. Colbruno was the Vice President of Government Affairs for Clear Channel Outdoor in Northern California for eleven years. During that time, he also served as the Chair of OakPAC, which supports candidates who support issues important to the Oakland Metropolitan Chamber of Commerce.

Until July 1, 2016, Colbruno served on the Board of Directors for the UC Berkeley Theatre project, He currently serves on the Merola Opera Board and on the Advisory Board for Opera Parallèle and West Edge Opera. He previously served on the board of the Philharmonia Baroque Orchestra for six years where he founded the Corporate Council. He has also has served as the National Director for the California State Outdoor Advertising Association, Chair of the Chabot Space and Science Center in Oakland, served on the Board of Directors for Equality California, chaired the Cryptosporidium Task Force in San Francisco, curated two architectural exhibits in San Francisco, and chaired the Taste of Oakland event for the Oakland Convention and Visitors Bureau.

From 1998 to 2003, he was listed in the Guinness Book of World Records for building the World’s Largest Caesar Salad.

In October 2015, he was featured as one of the top Vegan Leaders in business.

In his spare time he is a docent at Mountain View Cemetery, and maintains the Lives of the Dead blog. Along with historian Dennis Evanosky, he is co-author of "Lives of the Dead," a book about the cemetery released in 2015. He leads a number of tours, including the Headline Maker's Tour, Artists & Architects, Famous Women, Founder's Day Tour and Mayor's Tour, in addition to being an expert on Gypsy kings and queens buried at the cemetery.

He is also an independent producer of classical music and opera performances, including the U.S. debut of baritone Marco Vassalli with MusicaMarin. Colbruno commissioned two songs from New York-based composer Clint Borzoni  written for baritone and string quartet (Stufen with text by Hermann Hesse and Magere Kost with text by Hilde Domin). They are viewable on YouTube. He has also produced BooM BooM Baroque in San Francisco, Beer and Baroque in Berkeley, the  West Coast recital debut of baritone Randal Turner in San Francisco,  the West Coast premiere of Ricky Ian Gordon's opera "Green Sneakers" at Fort Mason in San Francisco, and the West Coast debut of tenor Jonathan Blalock and bass Aaron Sørenson at Duende in Oakland. On July 22, 2017, he sponsored the U.S. and modern premiere of songs by Spanish composer Antonio Soler with West Edge Opera, featuring German bass Malte Roesner, American soprano Aurora Perry and American tenor Samuel Levine. He subsequently commissioned a song cycle by Clint Borzoni, based on the poetry of Wendell Berry. The cycle, which is entitled "The Hidden Singer" revolves around seven poems all associated with birds and was premiered with Musica Marin on June 3, 2018, A song cycle of Father/Son songs with Christian Pursell has been delayed due to COVID. He is currently working on a new song cycle with baritone Sidney Outlaw and composer Brittney Boykin.