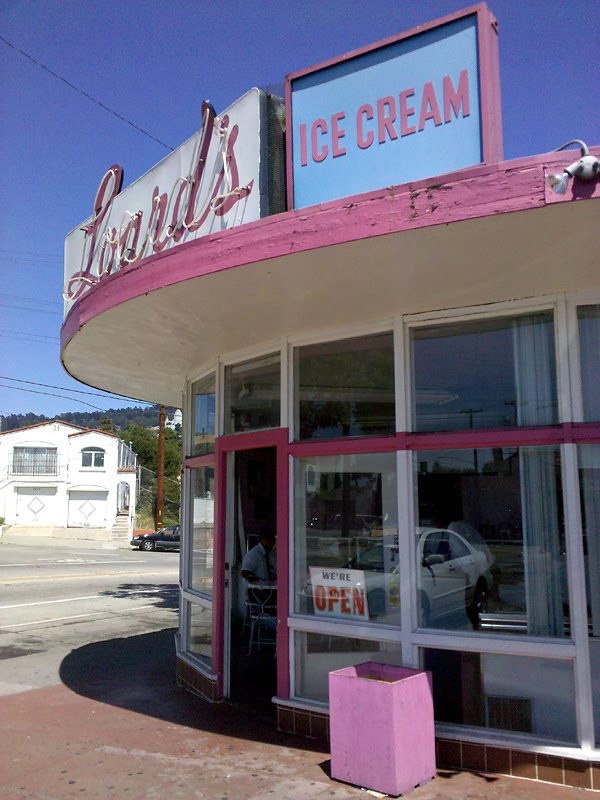 Loard's Ice Cream has several locations and had more in the past, this entry is about the two Oakland ice cream parlors. While working in the UC Berkeley Accounting Department following his WWII service in the Army, Russ and his wife Frances Lathbury Salyards decided to start an ice cream business. Loard's was founded in Oakland by Russ Salyards and Keegan Low (the Loard's website says "Keegan Low," but the SFGate article names "John Low" as the co-founder) to "make and serve premium ice cream." The first Loard's Ice Cream and Candy Shop opened in 1950, with the company name a combination of the founders surnames. For 60 years, Russ Salyards was loved by both his employees and customers, including "generations of children."

The Loard's in Dimond was a delicious treat as long as you were flexible: your favorite flavors weren't always there. Also, as of December, 2012, ice cream cakes were no longer available. Per the employee, ownership had changed: I'm not sure if this means that there was a new owner for this location or if there was a new manager. Ice cream cakes are amazing and should be available everywhere.

In June 2010, about a year before Russ Salyards' death, high-tech executive David DeMarinis bought Leone Ventures, Inc., parent company of Loard's Ice Cream, along with the 12,000 sq. ft. factory in San Leandro which annually makes over 100,000 gallons of handmade ice cream in 59 flavors. DeMarinis also opened Silicon Valley's first Loard's in Umbarger Square. Loard's are individually owned and operated (not sure if they were when Russ Salyards was owner) and DeMarinis plans to charge new ice cream parlor owners $50,000 to $100,000 to open a shop, but will not charge franchise fees. Annual revenue for Loard's is below $10 million, and 3% of profits are donated to charitable organizations. DeMarinis plans to open 25 to 50 new Loard's Ice Cream shops over five+ years around the Bay Area, with up to 10 being located in San Jose.

In April 2014, the Loard's in Dimond/Laurel was hit by a speeding car and the front of the building was seriously damaged. The owners quickly started repairs. In May 2021, they were evicted and the location was closed.