An illustration of the former Kahn's building in Oakland, which later became Rhodes and then Liberty House

Kahn's Department Store was founded by Israel Kahn (1822 – 1883) in 1879. The business grew, and eventually a new building designed by architect Charles W. Dickey was built in 1912 at 1501-39 Broadway (at the corner of Broadway and 16th Street) in Downtown Oakland. In 1960 the store was rebranded as Rhodes Department Store. In the mid-1970s, the store was rebranded yet again, this time as a Liberty House store. It appears that the store closed for good in 1983 or 1984. The building was awaiting restoration and rehabilitation when it suffered extensive damage during the Loma Prieta earthquake, and it remained closed for many years.

In 1991, the Oakland Redevelopment Agency purchased the building (and some adjacent properties) in order to facilitate the restoration of the building. In 1998, the Agency entered into an agreement with an entity known as Rotunda Partners II, LLC, led by developer Phillip H. Tagami, regarding the restoration of the building, which had been renamed the Rotunda Building. In 1999, the property was sold to Rotunda Partners, and the company began a a complete renovation which restored and modernized the building over an 18-month period, at a total cost of approximately $50 million, including $12 million borrowed from the Agency.

"In 1946, Kahn’s retail workers went on strike for the right to unionize, ultimately sparking a citywide shutdown."1. Read more about the 1946 Oakland General Strike.

In 1989, the Rotunda Building (site of the former Kahn's Department Store) was listed on the National Register of Historic Places, #89000194. The Rotunda Building was designated as Oakland Landmark #132 on April 9, 2002, under Zoning Case #LM99-346. One of the outstanding features of the building is the 120' high 5,000 sq. ft. elliptical dome, along with the grand staircase, the gold trim, elegant columns and terrazzo floors. 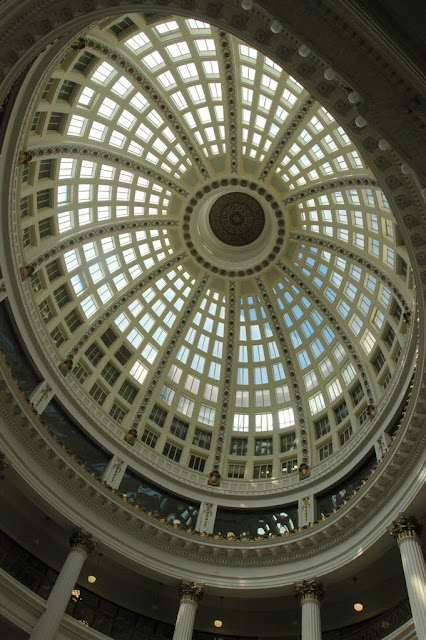 Dome in the Rotunda Building, Oakland, California
photo from Our Oakland 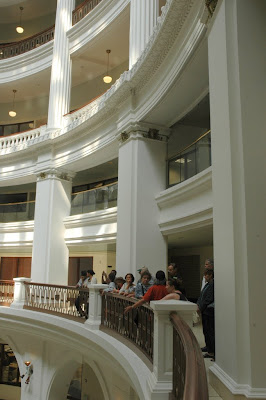 Interior of the Rotunda Building, Oakland, California
photo from Our Oakland another postcard from of Kahn's (undated so possibly under copyright) here.