Prior to coming to Oakland, he headed schools in Healdsburg and Petaluma. In 1886 he was elected principal of the Lincoln School in Oakland. When he began serving as Oakland’s Superintendent of schools in 18891, there were only 164 teachers in charge of 6,000 children. Upon his retirement 25 years later, there were 600 teachers.

McClymonds was instrumental in introducing “physical culture” departments: all students had to participate in what is now thought of as P.E.2

He was an active member of the Oakland Masonic Society and served as the Secretary of Chapter No. 36, as well as the Recorder of Oakland Council, No. 12.

John W. McClymonds was a member of the Astronomical Society of the Pacific.3

”Funeral services for J. W. McClymonds, superintendent emeritus of Oakland public schools, will be held tomorrow at 2 pm from the family residence, 83 Monte Vista Avenue. Interment will be private. One of the best known educators on the Pacific Coast died in the Florence N. Ward sanitarium in San Francisco yesterday of heart failure. He had been active in his work until a week ago. On Monday he crossed the bay to consult a physician regarding his health. He collapsed on the way and was removed to the sanitarium where death followed. Besides his widow, Mrs. Virginia McClymonds, prominent in club circles, McClymonds is survived by a daughter, Mrs. Ethel Kinsell, wife of Judge Kinsell, and a son, Vance McClymonds, an Oakland attorney. McClymonds for twenty-four years was superintendent of schools in Oakland ?? receiving his appointment. In following retirement in 1913 the position of superintendent emeritus was created in compliment to his long service. he was placed in charge of the patriotic activities of the department. During the war he gave a signal service in the Junior Red Cross movement making a high record for the local schools. Born in Slippery Rock, PA 73 years ago, McClymonds had lived in this city for more than half a century. His first appointment to the local school department was as principal of the Lincoln school. Throughout his career as an educator he was known for his untiring efforts in the betterment of the school system and for his progressive thought.”

On March 9, 1924, the Oakland Tribune reported on the dedication of McClymonds High School at 26th and Myrtle Streets, which was named in honor of J.W. McClymonds on the 2nd anniversary of his death. The High School occupies the entire block. A tribute was given by Fred Hunter, and a eulogy by Lincoln S. Church. A bronze memorial tablet was placed in the school. The school building contained fifteen rooms, eleven shops, storerooms, domestic millinery art rooms and a 1,000-seat auditorium.

“Mrs McClymonds was prominent in literary and artistic circles and had kept up an active interest in community affairs on the Monterey peninsula since the death of her husband in 1922.” 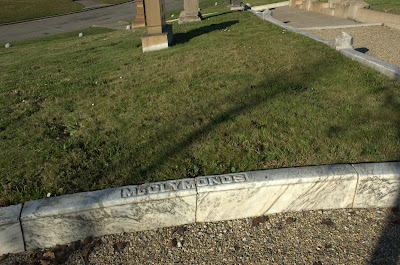 McClymonds plot at Mountain View
photo from Our Oakland

The plot at Mountain View Cemetery (plot 36, grave 97) has no marker other than the marble curb that marks the walkways in plot 36. However, cemetery records indicate the remains of 12 people are interred there: