One of Oakland's celebrated, residents whose memory of this city began with candle light, grew with gas and kerosene and survived to know the Neon days was Judge John J. Allen,

The Judge died February 12, 1950 at 86. He spent 83 of those years in Oakland. His death climaxed a legal career of 64 years of which 21 were spent as Alameda County Superior Court Judge. Previous to this he had been Justice of the Peace of Oakland Township (1890-1898) and later district attorney. A son, John J. Allen Jr., now represents this community in Congress from District Seven.

On a Sunday night, September 29, 1935, Judge Allen made an informal talk over The Tribune Station KLX. In it he recalled the days of his youth. Among his more fond memories were, those concerned with the "Creek," that portion of Oakland Harbor which extends from the Bay proper to East Oakland.

"In early days small sternwheel boats were referred to as 'wheel barrow boats' and called at Broadway wharf but these calls from San Francisco were not more than two or three times a week.

“Some of these boats had a unique way of announcing their approach. The 'Chu-du-Wan' and others were equipped with what the boys called steam pianos. The boat came steaming up the Creek playing short sketches from popular airs. There was no regular schedule .. and the steam music informed waiting shippers that it was time to load.

"In time larger boats were used, and it was not uncommon to see a boat called the 'Louisa' held up on the mud flats for hours until a running tide gave it sufficient water upon which to continue its trip. It was a common understanding in those days that when you took this trip it was advisable to take your lunch.

One of the Judge's more significant recollections concerns a memorable law suit.

"In 1900 the Casserly heirs sued the county of Oakland to recover their interest in the courthouse block. As district attorney, I was required to defend this action. There was a great surprise when it was discovered that the county had no record title to these properties. It was in fact, a squatter.

"Extensive improvements had been made and large sums of money had been expended, and it was imperative that the county interest in the block should be established. This could be done only by the development of such facts as would give the County a title by prescription from long, continuous possession.

"We found that boats came but two or three times a week to the Broadway landing and that farmers, woodcutters, stock. raisers and others who had property to be shipped would use these blocks for storage of all kinds of moveables until the arrival of one of the boats.

"The petitioners recognized this use, and in 1853 the block upon which the Hall of Records stands was fenced by the city and called Franklin Square. Upon this square the city authorized the building of an agricultural pavilion for County exhibits, a church and a little iron building which was used as a county jail.

"The County was successful in its defense of this action in the Superior and Supreme Court and a declaration was obtained that the property belonged to Alameda County ..." 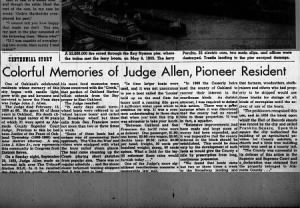