Joe Shoong (August 30, 1879 – April 13, 1961) was the founder of National Dollar Stores. His family lived in Adams Point, and he was active in the local Chinese American community.

Shoong was born to Joe Gon Shoong and Wong Shee Shoong of the Guandong province of China. 2 Some sources say Joe was born in China and immigrated at about age 18, but many say his parents immigrated first and Joe was born in San Francisco. On census forms and other official records, Joe consistently listed California as his birthplace. However, in the town of Long Tau Wan, Guandong, China, there is a school called the Joe Shoong School, and his picture is on the wall.3 He paid for construction of the school in 1928. If he was born in China, the obfuscation may have been because of the Chinese Exclusion Act of 1882 which was still in effect.

Architect Julia Morgan designed the Mediterranean-style Shoong family residence which was constructed in 1922. It is located at 385 Bellevue Avenue in the Adams Point neighborhood, and was declared an Oakland landmark in 1995. Their home was a center of Chinese American society, with Mr. & Mrs. Shoong entertaining many prominent people in their home, including Chiang Kai-Shek, who was guarded by the FBI during his visit. Their phone number in the 1940s was GLencourt 1438.

Shoong generously donated much of his millions to various philanthropic projects, including a scholarship endowment for Chinese American students at UC Berkeley, and construction of the Chinatown community center at 9th Street and Harrision Street. The renovation of the Paramount Theatre, and financial support for the Children's Fairyland Tree Top Teahouse and Dragon Slide were also projects to which Shoong and his son Milton donated funds. Joe also donated for the creation of a Chinese school, the Shoong Family Chinese Cultural Center which opened in 1953.

Joe Shoong was a Mason. 5

Joe Shoong is buried in Mountain View Cemetery, along with his wife Rose Elizabeth Shoong. 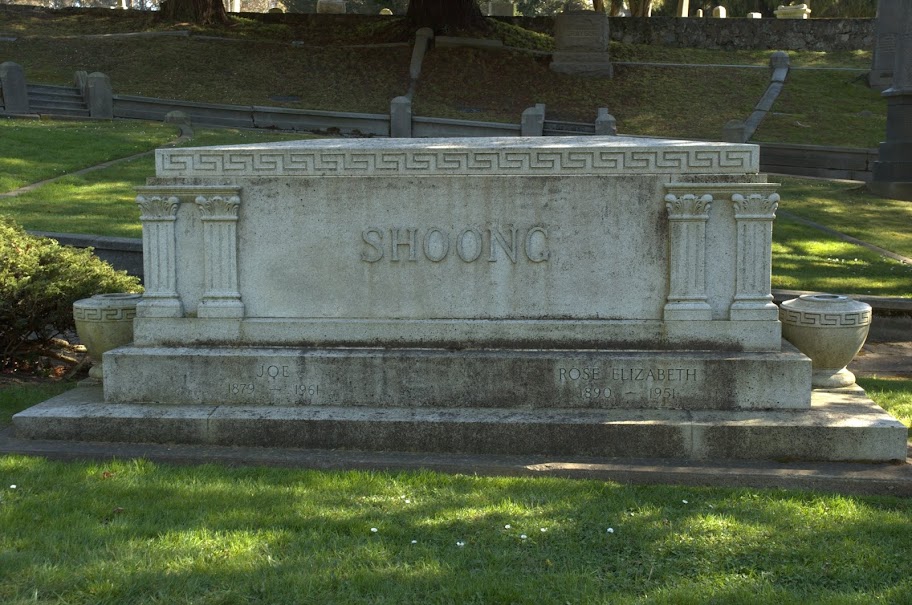