Jennie (Virginia) Prentiss (1832 or 1842 – 1922) was a Black woman who was Jack London's foster mother. Jennie was born into slavery in about 1832 or 1842 in Tennessee or Virginia, and served as the companion to a plantation owner's daughter. Later, after fleeing the Civil War, she ended up in St. Louis, Missouri, where she married Alonzo Prentiss.

Jennie and Alonzo came to San Francisco in the 1870s, where Alonzo worked as a carpenter. In 1876, Jennie gave birth to a stillborn child. Flora Wellman (Jack London's mother) was unwell and Jennie agreed to take infant Jack into her home to raise him through infancy. Jack's relationship with lasted the rest of his life. Dr. Clarice Stasz wrote:

After the boy moved back with his mother and step-kin, Jenny and Alonzo remained close to him. For many years the two families lived near one another in Oakland. Johnny came to view the Prentiss children as his cousins, and attended various African American activities, such as church, with the family. The Prentiss family was more stable emotionally and financially secure than the Londons. Jenny was devoted to the youngster, and lent him money to buy a boat to sail on San Francisco Bay. 1

In 1891, Jennie Prentiss loaned 15 year old Jack London $300 to purchase his first boat, the Razzle Dazzle. Jack London was introduced to religion in Sunday school at the First African Methodist Episcopal Church (AME) where he attended with Jennie. In 1912 the church built a large building at Broadway and 24th, where Jennie was an active member of the Mother’s Charity Club. Jack showed his love for Jennie by donating $15,000 to the church.

The Prentiss family was friends with the family of William Shorey.

Daddy always said that the only love and affection he knew as a child came from Aunt Jennie. He never remembered his mother kissing him. Well, I don't either, Grandma was not demonstrative. Aunt Jennie not only loved Daddy she helped him in many ways, loaned him money, backed him in everything he did. She was a wonderful woman and a friend to everyone. Not only to Grandma but to Daddy and me — a loving friend.

After Jack London became successful, he supported the then widowed Prentiss. He remembered her in his will when he died in 1916:

To my old mammy Jennie Prentiss, my estate shall pay fifteen dollars each month. Also, and in addition, my estate shall see that she is suitably housed and shall pay for said housing. Also, any expenses extraordinarily accompanying her demise within reason, shall be borne by my estate.

Jennie died November 27, 1922 at about age 91, and she, Alonzo and her children (who died in early adulthood) are buried in Mountain View Cemetery in an unmarked grave. Alonzo is buried in the veterans' plot. 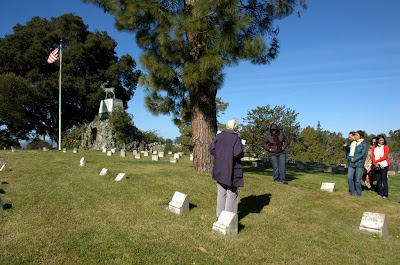 unmarked grave of Jennie Prentiss
photo from Our Oakland