… Well, by now they are an institution, aren’t they?

(Meaning, we can probably skip the usual intro: “Green Day is an American rock band, formed in 19ZZzzzz…”)

Why not just link to wikipedia here and call it a day? Besides, who cares about Green Day? Well, personally I respected how, after Dookie, they could’ve played things safe and stayed on the usual pop-punk gravy train forever—but instead, they grew a social conscience, and came back with American Idiot (2004). Their action inspired and maybe even radicalized zillions of young people globally, which for my money, made them worth caring about.

But to what extent did Oakland factor into their success? Weren’t they from somewhere in the north bay? They first got noticed at Gilman St. in Berkeley. So let’s use this topic to segue, right here, into discussing their … 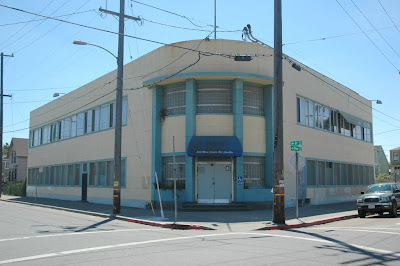 warehouse at 8th and Pine
photo from Our Oakland