The Ginn House (aka the "Frederick B. Ginn House") is an English Arts and Crafts style home in Preservation Park which was designed by architect A. Page Brown for Mary (Crocker) Burell and Frederick Burrell Ginn about 1890. Willis Polk is said to have designed the third floor interiors.

Frederick Ginn was the founder of Ginn & Co. Publishing, which still exists, though as part of the larger Penguin Group of publishers.Arts and Crafts in style, the Ginn House is one of the only non-Victorians in Preservation Park. The Ginn family lived there from 1890 until 1907.

The house was later used as the Nile Club, the prominent Oakland men's social club. Next door to the Ginn House is a social hall, which is still used for events and meetings. The addition was designed by Charles W. Dickey, and added in 1911. 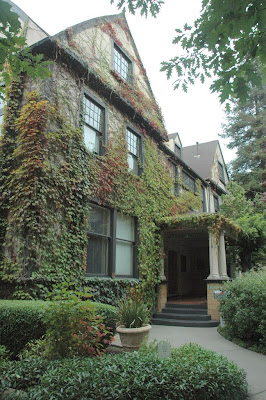