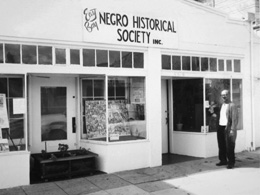 The East Bay Negro Historical Society (EBNHS) was the predecessor of the African American Museum and Library at Oakland.

In 1988, Dr. Lawrence Crouchett was appointed executive director, and it was renamed Northern California Center for Afro-American History & Life (NCCAAHL). 1