The National Baptist Association, the largest convention ever held in California by colored people, has Just closed in Los Angeles. It brought with it 7000 negro delegates from all sections of the United States. The brains of the negro race was represented in this gathering. The president of the convention, Rev. L. K. Williams, pastor of Olivet Baptist church of Chicago, reputed to be the largest negro church in the world, in his opening address spoke on the "Exodus of the Negro Race." He said:

"The most serious question before the American people today is not that of commerce, transportation, agriculture, finance, education or even the world's court, but that of America finding the proper relation between its most dominant human groups, black and white. It cannot in truth be said that the wise men of America do not know what to do with the subject of proper inter-racial relations. They have done everything else in the past, and to fail here is a reflection on their past history and boasted claim of greatness. The great trouble is not a lack of knowledge, but a lack of courage."

After the close of the convention the delegates went to San Francisco for a day of sight seeing, leaving on the midnight train for their homes. A reception was held for them in Oakland at Beth Baptist church through the efforts of Mr. Marshall and Mrs. Melba Stafford of Oakland. The following is a partial list of delegates of distinction who attended the reception: Dr. A. M. Townsend, president of the Negro Bank in Nashville, Tenn., a former lecturer on anatomy in a negro college and at present secretary of the Sunday School Publishing Board. He has under his supervision the erecting of a publishing plant in Nashville by negro builders, which when completed will cost $450,000.

The following delegates are guests of local citizens for a few days: With Mrs. G. C. Coleman and life-long friends of her husband, Rev. G. C. Coleman who is visiting Henry Allen Boyd of Nashville, Tenn., are the following: Rev. E. W. Johnson, who for thirty-four years has been pastor of St. Paul church, Philadelphia, and is now serving as president of Downing Institute of Pennsylvania, and Mrs. Alice White, president of Mt. Carmel Baptist Women's Home Missionary Society of Philadelphia. With Mrs. Rhodes, 831 Poplar Street, Oakland, is Rev. S. M. Hedgeman of Philadelphia; with Mr. and Mrs. Whalen, 830 Linden, is their brother. Rev. Walters of New Orleans, with Sergeant and Mrs. Saddler of 832 Thirty-sixth street, is Rev. Herring and Rev. Chas Favors of St. Joseph, Mo. The last named is brother to Mrs. Saddler, and has the distinction of being the youngest man in the United States to pass a civil examination for meat inspector for the government. He was appointed as government meat inspector at the age of 19. He has served in packing houses in Chicago, Omaha, Neb., and St. Joseph. It was while serving in Chicago that he used his evenings and spare time in attending classes in the University of Chicago and at Moody Institute. Mr. and Mrs. Sam Parker of 721 Thirty-fourth street have as their guest their nephew, Clarence Gambole from Davenport, Iowa, and Mrs. Ross from Benicia, Cal.

Attorney Myrtle B. Anderson, native daughter, has the distinction of being the first California negro woman to be admitted to the bar. She was recently admitted in the state of New York. She has returned to California, and is making a lecture tour on "The Spoiled Children of Civilization." Miss Nanna Burroughs, founder of the National Training School for Negro Women, is touring the state on a lecture platform. She has an international reputation as an orator.

R. E. Banks, a colored Boy from Los Angeles, has just won honors in Delaware. In a class of fourteen white boys and three negro boys he was the only one to pass the Delaware State Board of Pharmacy examination. He is a product of California schools and Howard University, a negro school in Washington.

The negro people throughout the state and nation will mourn the passing of Prof. Charles Alexander in Los Angeles this week. He was internationally known as a lecturer, author and newspaper man. He published in Los Angeles the "Citizen Advocate." Death also claimed two delegates to the National Baptist Association - Rev. N. Vanderlip of Kansas City and Rev. J. M. Harris of Texarkana, Texas, who was a member of the finance board. 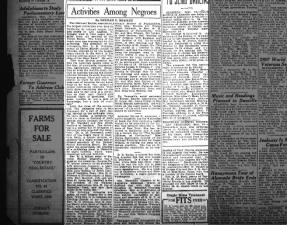