The commencement exercises week at the University of California was of special interest to the colored people of California. In the list of graduates were: Miss Ida Jackson, receiving the degree of master of science. Her thesis winning her this degree was "The Development of the Negro Child in Education." It is the first thesis ever written on the subject. 1

Miss Virginia Stephens was graduated from the college of commerce, receiving the decree of bachelor of science. During the past two years she has studied commerce as a pre-legal course and will re-enter the university next semester to complete her study of jurisprudence. This girl offered the name of Jewel City to a committee appointed by a local paper to secure a pet name for the P. P. I. Exposition. Out of 1300 names submitted, her name was selected. Shortly afterward the family moved to Del Monte, Cal.. where Virginia entered the grammar school in Monterey. She completed in three years the high school course in Monterey and entered the University of California. She has participated in campus activities, having taken great interest in the drive to raise funds for the building of the stadium. Through her leadership the colored girl students completely covered a large automobile with paper-made popples. This machine was used in the parade and received honorable mention in the Daily Californian and a local paper. She is president of Rho chapter, Alpha Kappa Alpha sorority of colored girl students. She is a native daughter, her grandparents having come across the plains in pioneer days. Her father, William Stephens, is from Accomack Va., but was educated in the public schools of Oakland. He served for a number of years on the private car of Mr. Crocker of Burlingame, and later acted as chief steward for the Del Monte Golf Club. He is now in Oakland in business for himself,

Allen O. Newman was graduated from the college of dentistry. This Is his fourth college degree. He served overseas in the World War, winning distinction.

George Johnson received the degree or B. A., majoring in anthropology. He is president of Epsilon chapter of the Alpha PI Alpha fraternity of colored students. He was sent as a delegate to the national annual meeting held during the holidays in Columbus, O. He served as a member of several important committees and was elected to a national office. He is a native son, his grandparents having crossed the plains into California during pioneer days, locating In San Bernardino, where his parents still live.

Stewart T. Davidson of San Francisco received the degree of M. D. and a commission in the medical corps, R. O. T. C. This is the first time this honor came to a colored graduate during peace.

Miss Ruby C. Jefferson of Los Angeles was graduated from the college of economics, majoring in education. She is a member of Rho chapter, Alpha Kappa Alpha sorority.

This week throughout the United States the Alpha Pi Alpha fraternity and the Delta Sigma Theta sororities and their chapters of colored students are observing better education week, "Go to High School" and "Go to College" week. In the large Eastern cities the national bodies have made arrangement with radio stations to broadcast addresses made by men and women of distinction in an effort to stimulate among colored youths of the country a desire for better education. In keeping with this spirit, the Methodist General Conference (white) now being held in Springfield, Mass., the 850 delegates adopted committee recommendations on interdenominational cooperation for better negro education in the South. This conference has many negro churches affiliated with it, and at the last conference a colored bishop was elected. In this state there are several such churches - the Taylor Memorial church of Oakland, of which Rev. Scott is pastor, and Wesley chapel of Los Angeles, of which Rev. Shaw is pastor.

The Alpha chapter of the Alpha Delta Sigma Theta sorority of colored students of the University of California held an interesting meeting Thursday night in the Y. W.C. A. at the university, at which time they were addressed by Professor R. S. French of the department of education of the university and principal of the School for the Blind in Berkeley. His subject was "Individuality in Education." This is part of the better education week program as given in California by those colored fraternities and sororities.

Rev. Owen Trop of Los Angeles has been holding evangelistic services in Alcatraz hall in Oakland. He is a native son and a graduate of the Seventh Day Adventist school and college of St. Helena, Cal. Previous to studying for the ministry he was graduated from the school of music of San Fernando College, California.

The Social Club of Zion church, Oakland, held a public reception on Mothers' Day in the parlors of the Linden street branch Y. W. C. A.. honoring all mothers of Oakland. Mr. and Mrs. Norris of Filbert street, Oakland, gave reception to the following friends who have been spending a few days in Oakland: Mrs. P. Moultri, of Port Huron, Mich., Dr. and Mrs. Watts, of Fresno; Mr. and Mrs. Calhoun, of Fresno; and Mrs. Williams, of Red Bluff. Mrs. Lillian Jetter Davis and daughters assisted in receiving the guests.

Mr. and Mrs. Marcum and Mrs. Wright of Modesto, motored to Oakland to attend Mother's Day exercises with friends and members of Zion church, Oakland. 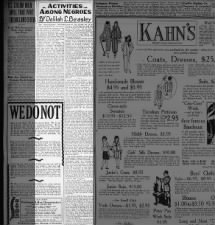