The federal court of appeals has ruled against the Richmond segregation law, according to a communication received from the na. tional headquarters of the National Association for the Advancement of Colored People which state: "The United States circuit court of appeals at Richmond, Va., today affirmed the recent decision by Judge Groner of the United States district court of the eastern district of Virginia, who ruled the recently enacted segregation ordinance passed by the city council of Richmond to be unconstitutional. Today's decision resulting from an appeal by the city of Richmond from Judge Groner's decision was rendered by Circuit Judges Parker and Northcott and District Judge McDowell. Today's ruling dealt a crushing blow to the hopes of the Richmond authorities that the ordinance would be declared valid.

The decision affirming Judge Groner's was made on the basis of the segregation case of Buchanan vs. Warley, won by the N. A. A. C. P. in 1917, which decision was affirmed in a case also carried to the supreme court by the N. A. A. C. P. of New Orleans through Harmon vs. Tyler. The decision rendered today quoting the above mentioned cases declares: "Attempt is made to distinguish the case at bar from these cases (Buchanan vs. Warley and Harmon vs. Tyler) on the ground that the zoning ordinance here under consideration bases its interdiction on the legal prohibition of inter-marriage and not on race or color; but as legal prohibition of intermarriage is: it based on race, the question here, in final analysis is identical with that which the supreme court has twice decided in the cases cited."

The court of appeals' decision continues by dismissing consideration of cases cited by the Richmond city authorities in which attempt is made to justify the segregation ordinance on the basis of court decisions upholding the right to redistrict property in certain cases for erection of certain types of buildings. "They deal," the ruling concludes, "with the right of a city to forbid the erection of buildings of a particular kind or for a particular use within certain sections of the city, which manifestly is a very different question from that involved here. That the supreme court did not consider that the doctrine of Buchanan vs. Warley was in any way overruled or limited by Euclid vs. Ambler, shown by the fact that Harmon vs. Tyler was decided five months afterwards the latter case and its decision was expressly based on the former. There was no error and the decree below is affirmed."

Lucius F. Cary, assistant city attorney of Richmond, who argued the case announced following the rendition of the decision that the city would carry the case to the United States supreme court. There seems, however, little likelihood of success in view of the unequivocal language of the United States supreme court in the cases of Buchanan vs. Warley and Harmon vs. Tyler. The situation occasioned by the Richmond ordinance is a novel one in that there was considerable opposition to the ordinance not only by colored people, but by whites as well. Colored citizens under the leadership of Dr. Leon A. Reid, Richmond dentist, raised funds to fight the case. The Richmond daily papers unequivocally condemned passage of the ordinance and the Richmond Inter-racial commission was active against it. Throughout the progress of the case attorneys Alfred E. Cohn, and Joseph R. Pollard, of Richmond, had the cooperation of the National Legal Committee of the N. A. A. C. P. and Walter White, acting secretary of the organization paid a visit to Richmond to help in preparation of the plans to contest the ordinance. The case is known as "City of Richmond vs. J. B. Deans."

Sponsored by the Harmon Foundation and the Commission on Race-Relation of the Federal Council of Churches, an annual art exhibit has been held daily at International House, 500 Riverside Drive, New York. The exhibit this year opened January 7 and closed January 19. It included more than 100 paintings, wood carvings, soułnture, photographs, etchings and acquaints, done by Negroes through out this country, and some who have studied abroad. The exhibit prize of $250 is donated by an anonymous patron of the arts, and is given for what the judges. consider the best single piece of work being shown exclusive of that: which has already received a Harmon Award.".

The prize work is that of Elizabeth Prophet, or Warwick, R. I., who has spent the past eight years in Paris where she has been a student at l'Ecole des Beaux Arts de Paris. Meta Warrick Fuller, Sculpturess; George Hellman, art critic; Karl Illava,- sculpture; George Luke, painter, and Victor Perard, painter, composed the jury. During her stay in New York, Miss Prophet is making her home with Dr. and Mrs. W. E. B. DuBois, 226 West 150th street,

It was through the N. A. A. C. P. that this Negro girl sculptress was discovered and the work of Elizabeth Prophet was given to the world. Dr. Dubois, editor of the Crisis, the official publication for the N. A. A. C. P., had the following to say concerning her work in the December issue of the "Crisis": "She was a stern, self-willed girl, She wanted to be a sculptress, she is a sculptress, first studying at the Rhode Island School of Design, and then almost without money, without friends, and frail of physique,, she went to Europe. In Paris, she entered the celebrated Ecole des Beaux Arts, and her work is today called in leading reviews "some of the most expressive sculpture of this generation from beyond the sea."

"She made her first appearance in the Paris Salon d'Automn in 1924. Since then she has exhibited in the "Salon d'Automn," and the "Salon des Artist Francais." She sent some work last February to the annual exhibit of the Boston Society of Independent Artists, The Boston Evening Transcript said: 'In sculpture there were but two things of importance. One was the head of a Cossack, the other the head of a Negro cut in wood. The latter was a powerful thing, one of the few outstanding things in the show. It was done by Elizabeth Prophet.”

Continuing the article stated: "The Paris critics have been outspoken concerning Elizabeth Prophet; Raymond Selig, and Jules de Saint Hilair are quoted at length from the Revue du Vrait et du Beau. The article closes with the following: 'All of Elizabeth Prophet's work is full of allure and character notwithstanding her fine artistic sense and mastery in her field Elizabeth Prophet has sacrificed both health and strength to her art. She has starved herself and gone. almost without proper clothing. She has cast her own I heavy bronzes, lifting great weight because she could not afford to hire help. "Grim and determined she is still working on without assistance almost unknown in America. Henry 0 Tanner the great Negro painter has declared Elizabeth Prophet is a great sculptress.'"

It is now nearly four years since Harry C. Smith, editor and publisher of Cleveland Gazette, launched a fight to prevent the erection in the city of Cleveland, Ohio, of a segregated hospital for Negroes. Smith served three years in the Ohio legislature, where he introduced many bills of value to his race; notably the "Ohio Antilynching bill," and the "Ohio Civil Rights law," both of which were passed. Previous to launching the fight against a segregated hospital, Smith enlisted the united support of his race in registering and voting for a Negro member of the city council. The election resulted in the election of two additional Negro members of the city council, namely Attorney Clayborne George, Dr. Leroy Bunday, and Attorney Lawrence O. Payne, and one white member favorable to the 'race, a Dr. F. W. Waltz.

The question of a segregated hospital became a bitter campaign issue because the city manager was favorable to the project. Dr. Waltz immediately upon his election made a public statement in which he said he was going to visit New York and Boston to study the problem of Negro nurses and interns in city hospitals. Immediately upon his return he introduced a resolution according to this week's Cleveland Gazette, which stated: The City Hospital will be opened to our nurses and interns for training on an equal basis with all other residents of this city and county, the city council decreed Monday night just before it turned to the business of removing City Manager Hopkins. The council east a unanimous vote to give all citizens the right to receive training as interns and nurses at city hospital in accordance with the United States Constitution, and the law of the state of Ohio (referring to the H. C. Smith Ohio Civil Right law). City Manager Hopkins in his last official act approved the resolution and sent it to the council. It was also approved by Director of Pub| lice Welfare Dudley S. Blossom."

The national office of the N. A. A. C. P. In a statement sent to it by Charles W. White, a member of the executive committee of the Cleveland branch who stated: "The resolution was introduced in the city council by Dr. Waltz, 80-year old councilman from the west side of Cleveland, who was supported in advocating passage of the measure by the three Negro members of the city council. The resolution Instructs the city manager of Cleveland to make such appropriate arrangements as shall afford all citizens of Cleveland an equal and reasonable opportunity to receive training as nurses or interns at the Cleveland City Hospital' 1 further provides that such opportunity shall in no event be denied or abridged on account of the race or color of any one seeking such training."

The Cleveland Gazette in summing up the reason for the successful passage of the resolution states "It became an acute problem for the council when the three Negro members refused to vote for a bond issue to establish an east side municipal hospital unless Negroes were given an opportunity for training in city hospitals in common with all others.

Congratulations are being extended to Miss Victoria. G. Shorey whose engagement has just been announced to Earl Andrew Beouf. She is the daughter of the late Captain Shorey, and Mrs. Julia Shorey, has been highly educated and is very prominent in fraternal work throughout the state and nation.

The following members were re elected to the committee of management last Monday evening: Attorney Lawrence Sledge, L. M Hudson, J. C Rivers, J. W. Ford and A. G. Pergerson. The new members elected are William Stephens, and F. L. Lee. The Junior Hi Y. boys club will be the guest of the Comrade club of Boys of Melrose Baptist church the first Monday night in February. They will be accompanied by their leader, Sam O. Coners.

The Linden Branch Y. W. C. A. will be addressed this afternoon bi Miss Alice Moore, who will speak on her recent trip to Palestine and the new women of Turkey. She will also display her collection of souvenirs collected on the trip. Tea will be served after the lecture. The biblical drama "Ruth and Naomi," will be presented in Fifteenth Street A. M. E. church next Thursday night. A musical program will precede the drama.

The colored citizens of Oakland have lost through death during the past week two highly esteemed citizens. Notably Franklin Burrill, for many years head janitor of Oakland Municipal auditorium and leader in the Louisiana Commercial pre-Lenten pageant. And the passing of Dad Moore, one of the best known Pullman porters in the United States, also passed away after serving in that capacity for over 40 years. He heartily sponsored better working condition and more pay for Pullman porters. 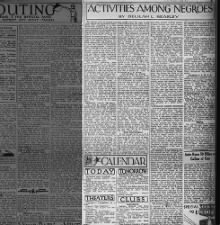