During the next six months there will be held conventions and conference of interest to the negro race. Two will be held this coming week in Chicago, the Lincoln League of America and the "Sanhedrin." The Lincoln League of America will hold its sessions in the auditorium of Bethel A. M. E. church. Colonel Roscoe Simmons, president, will make the opening address and will be followed by Henry Lincoln Johnson, who is the only negro member of the Republican national committee. The league meets only on Lincoln's birthday. It is not limited to any one section of the country. Its aim is to benefit the entire race. The convention will be addressed by John T. Adams, chairman of the Republican national committee, and United States Senator Medill McCormick, who will deliver an address on Lincoln. Important questions to be considered by the league will be the "Migration and Its Political Influence" and the "Races Political Status." J. B. Bass, editor of the California Eagle of Los Angeles, will head the California delegation. Several prominent clubwomen will attend the convention.

The other convention to be held of during the coming week in Chicago is the "Sanhedrin." This is an "all-race conference," and has been called by Dean Kelley Miller [Kelly Miller] of Washington, D. C. He has been working on the plans for years in an effort to formulate an organization by which all classes and organizations of the race could work together for the uplift of the race. This convention will meet in Wendell Philipps High School auditorium and the Y. M. C. A. (Wabash-avenue branch). The welcoming address will be delivered by Mayor Devers [Dever] of Chicago. The committee of welcome, composed of 100 citizens, is headed by Dr. George Cleveland Hall and Dr. Carl G. Roberts, vice-chairman. This is the first meeting of the organization and is of considerable interest to the race.

The National Negro League of Ball Players held a directors' meeting during the past week in St. Louis.

The reading public will remember the painting, "Christ in the House of Lazarus," [Notice the mention of Delilah Beasley, and the Oakland Tribune. - MF] that received the gold medal at the P. P. I. Exposition. The negro painter of this picture, Henry O. Tanner, is now giving an exhibition of his paintings at the Grand Central Palace, New York. Tanner is the son of the late Bishop Tanner of Philadelphia. He has lived in Paris for a number of years. The government of France has purchased five of his paintings.

The New Age-Despatch of Los Angeles in this week's Issue says: "Friends of James Alexander praise District Attorney Keys [Keyes] for the former's appointment as a criminal investigator. Alexander was placed upon the payroll as one of the sleuths of the office and has already started upon the performance of his duties." Alexander has many friends in the bay district. He served for many years as collector of internal revenue at the port of Los Angeles.

It is of interest to know why Dr. DuBois, [Du Bois] who was recently mentioned in this column as United States envoy to Africa, was selected by President Coolidge. Dr. DuBois, aside from being the editor of the Crisis Magazine and a director of the National Association for the Advancement of Colored People, is also the founder of the Pan-African movement. This organization held its third biennial sessions during the months of November and December of 1923. One session was held in the council chamber of the Dennison House, London, and the other in Lisbon, Portugal. Both sessions were attended by people of both races who have won international recognition, namely, Bishop Vernon of the African M. E. church, Dr. John Alcinder [Alcindor] of London and Chief Amoah III of the Gold Coast, Africa. The principal speakers at the London session were Harold Lask [Laski] of the London School of economics; Mrs. Ida Gibbs Hunt, wife of the United States consul at St. Etienne, France: Dr. DuBois and Sir Sidney Oliver. [Sir Sydney Olivier] H. G. Wells was present as a guest. After the session held in Lisbon. Dr. Du Bois salled for Africa as special envoy to Liberia.

The colored people of Oakland are mourning the passing during the week of Mr. Clayton, a respected citizen. His funeral was one of the largest ever held in Oakland, friends coming from all sections of the state to pay him homage. He leaves a widow and, one sister, Mrs. Walter Butler. 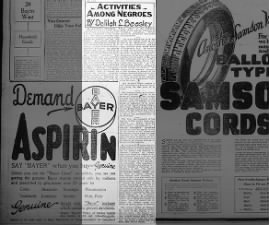