The daily press recently carried an account of a Pullman porter delivering a lecture on transportation before the students of economics at Dartmouth College, Hanover, N. H. The reading public in a large measure was surprised at the announcement because it did not know that a large number of dentists, doctors and other professional men of the negro race have earned their way through college by working for the Pullman company during vacation. It is one or the venues that has never been closed to the race. A number of Pullman porters coming into Oakland on transcontinental trains hold diplomas from universities. They have continued with the company after graduation that they might acquire sufficient capital to launch out for themselves.

Professor Malcolm Keir of Dartmouth did not know that the Pullman porter has often used this avenue of advancing in life. He did, however, observe that J. B. Ford. the porter with whom he came in daily contact while commuting from New York City on the Winsted express, was an intelligent colored man. He wrote to Ford and the superintendent of the division requesting that arrangements be made for the lecture. Ford appeared before the student body in a Pullman porter's uniform and delivered the lecture on "Transportation" as it pertained to his work.

[Read this blog post by John B. Ford's grandson Clyde, about his grandfather, the man referenced in the article above. - MF]

The Linden street branch Y. W. C. A. will send its first delegate to the national convention which meets in New York City this month. Mrs. Mable Calhoun, chairman of the newly elected board, will represent the branch.

An article appearing in this month's issue of the American Missionary magazine published as the official organ of the Congregational church missionary societies for the home field tells of the large number of colored girl graduates from Talladega College who have served in the different departments of national Y. W. C. A. work. It says: "In 1916 when the first colored Y. W. C. A. summer conference was held in Atlanta the secretaries were attracted to Juliette Derricotte, then a sophomore at Talladega. On completing her work here and taking a special "Y" training course she became one of the national student secretaries for colored schools. A position which she has held since with conspicuous success. In 1922 before the national student convention at Hot Springs, Ark., a Talladega senior was called to New York at the expense of the national headquarters to discuss plans to be presented at that meeting. A new constitution was adopted, giving the colored girls representation by four girls on the national student council. These girls are elected at the summer conference, and one of their number is chosen to sit upon the executive committee of the national student department. Two girls who were present at Hot Springs had a part in the consummation of that plan.

"At the southern division of the national student council, which meets at Atlanta, two colored girls and twelve white girls make up the council. One of these two for two years has been a Talladega girl. When the negro colleges were asked to nominate girls for the national commission of standards to meet at Greenwood Lake. N. J.. last September, a Talladega girl was elected as the only colored girl with white girls representing the entire country."

Calvin Hyde Post No. 194, American Legion News, Published in St. Louis, had the following to say in a recent Issue: "In the month of September members of this post decided that too many of the young boys of the immediate neighborhood were strolling the streets aimlessly. A meeting was called and all boys between the ages of 8 and 16 years were invited. The result was that about 200 boys answered the calls and an organization of Scouts placed upon the roll of the post."

The Chamber of Commerce of Nashville, Tenn.. has provided an adequate site adjoining Roger Williams University for the construction of the first unit of the Baptist Theological Seminary. As the institution grows, and resources become available, other buildings will be added. Rev. Overr. the president of this college, visited Oakland a few months ago.

The Ohio state colored Knights of Pythias have, under the leadership of Robert C. Barcus. grand chancellor of the state of Ohio. purchased a rest home for invalid members. It is located on the Jamestown pike one mile from Wilberforce college and within walking distance of Xenia. 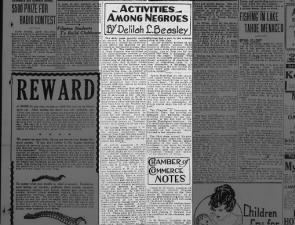